Boisbriand, Que. October 19, 2021 – Navaya Inc., an innovative Quebec-based cannabis producer, today received from Health Canada its sales licence to sell dried cannabis products across Canada. The licence brings to fruition the goal set out by Navaya to deliver high yield, consistent quality cannabis, to all Canadians of legal age. The newly licensed producer will be launching its products this fall in Société québécoise du cannabis (SQDC) locations across the province of Quebec. 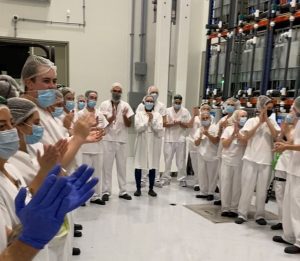 “After two years of hard work and labour, we’ve achieved our goal of acquiring our sales licence to sell dried cannabis products” says Sophie Denis, director of operations at Navaya. “With our industry-leading technology and advanced vertical cultivation equipment, we will now focus on delivering a consistent product initially to the Quebec market at retail in the coming months”.

Navaya’s vertical industrial hydroponic solution takes indoor production to the highest standard in the nation. Having unmatched hyper control of cultivation parameters with automatic irrigation and fertilization, full climate control and multi-tiered growing spaces using advanced LED lights are only a few of the features of its state-of-the-art equipment. Furthermore, Navaya’s production methods use significantly less energy consumption than traditional methods of production.

“Navaya is setting the new standard for licensed producers going forward and that’s something of which we’re so proud,” says Denis. “Our team here in Boisbriand is determined to bring long term economic growth to the region and this licence is another important step in reaching that goal.”

The company worked hard over the last two years to achieve this milestone and continues to develop policies based on Heath Canada guidelines. Navaya looks forward, over the coming months, to showcasing its facility to stakeholders and media.